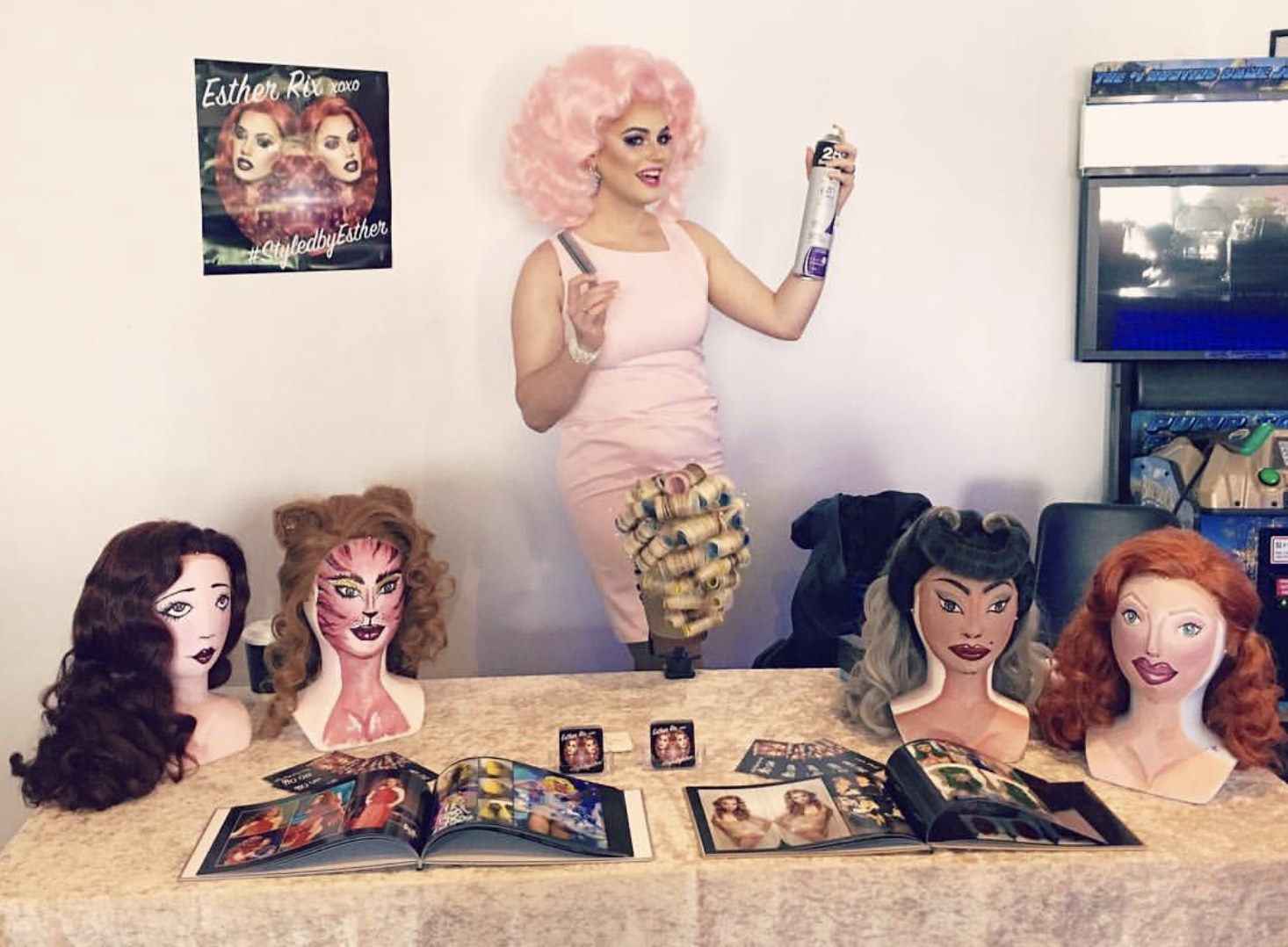 (Pictured, Esther with their early creations circa 2016)

Styled By Esther is owned and operated by Melbourne's own Wig Enchantress and Singing Songstress Esther Rix, along side with their self proclaimed drag wife and Icon Russell Brown aka BunGirl aka Russell From "Making It" Australia!

Esther's alter ego Kristian Zorino-Brown started playing with wigs at the same time they started dabbling in drag in 2013, Going on to study a Diploma of Specialist Makeup (specialising in SFX plus hair and wig styling for Film and Television) at Melbourne Polytechnic in 2015 and became a fully qualified make-up artist and wig stylist and that's where their passion for makeup and wig styling truly blossomed. What started as a small side hobby styling wigs for friends, flourished into the successful career and business Styled by Esther it is today.

Throughout Covid-19 Kristian had to pivot as many creatives did and has come out the other end a much better stylist with a larger variety of skills under their belt, not having access to wigs which was a ease prior, Kristian ordered in whatever stock they could get and was able to get creative and rather than recreate custom requested style's, was able to make art out of wigs, adding crystals, making custom accessories, ventilating custom streaks and hairlines to make their creations one-of-a-kind and unique.

Esther Created a TikTok account documenting their creations in March of 2020 which has amassed over 270,000 followers and 5.6 million likes which has gained them a larger International following and now sending wigs all around the world to the UK, US, Canada and many other countries. Esther has used social media to their advantage from the start ensuring to spread content across multiple platforms has really cemented the reputation of the business.

​Esther's styled wigs for several big name American Drag Queens from RuPaul's Drag Race through out the years which includes Laganja Estranja (Season 6), Pandora Boxx (Season 2, Drag U & AllStars 1-6), Latrice Royale (Season 4, AllStars 1-4, Drag U & Holi-Slay) Jujubee (Season 2, Drag U , AllStars 1-5, Queen of the Universe & UK vs The World), Eureka! (Season 9-10, Holi-Slay & AllStars 6) and even talented pocket rocket Shangela (Season 2-3, Holi-Slay) wore her Styled by Esther wig on the Drag Race All Stars Season 3 Finale! Since Drag Race now has many international franchise's Styled by Esthers clientele has increased exponentially, having styled many wigs for Karen From Finance for their stint on Drag Race Down Under (Season 1), as well as a few wigs for Kita Mean including her Crowning hair as the Winner of Drag Race Down Under (Season 1), as well as (Season 1) Kiwi Sister Anita Wiglit, Multiple wigs for Blu Hydrangea (UK Drag Race (Season 1) & UK vs The World Winner), Canada's Drag Race (Season 1) Winner Priyanka and (Season 2) contestant Synthia Kiss.

Esther's has also worked with singer-songwriter Tones & I, by styling two wigs for her music video "Won't Sleep" also working on set as Tones' personal wig stylist while shooting the video.